The Differences Between Basements and Cellars

As one of the top basement tanking companies in the Greater London area, we often hear the terms “basement” and “cellar” used interchangeably. Despite this, the definition of each term separates them from one another, setting a fully tanked basement apart from a tanked cellar.

As damp specialists who offer basement tanking services, we can tell you that a basement is part of a property that is partly or entirely below ground. As a result, domestic basements are often finished as living spaces, whilst cellars are designed for specific storage. Regardless of your basement tanking details, we’re well-informed about how to tank a basement room and a cellar alike.

As previously mentioned, the term “basements” is used to cover the floors of a property that sit ground-level or partially below (some basements contain large windows).

What’s the Purpose of a Basement?

There is no one set purpose for a basement, and there are many things that can be done with the space. From storage space to an added bedroom, there are various options about what you can do with a basement space. Basements aren’t enclosed spaces, meaning they’re suitable living quarters and often have concrete finished flooring, such as carpeting, tile, or wood. Despite this, a basement that is being utilised as extra living space should have one of the two basement tanking systems in the UK installed. 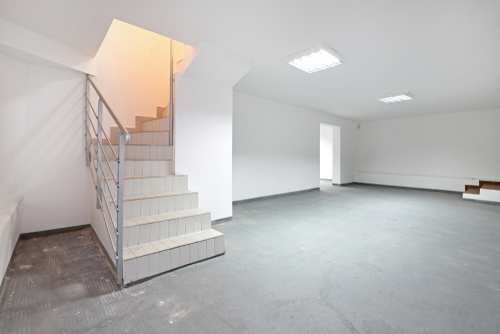 As aforementioned, a cellar is distinct from a basement in that it is used only for storage, heating plant or purposes other than habitation. A cellar is often a smaller space than a basement. Often without the benefit of direct sunlight and with cooler temperatures cellars are used as general storage areas – for example wine storage.

Similarly, cellars may not always count as storeys of the home and may even have access situated away from the primary property. Therefore, if you need to exit your home to access the area, you can say with confidence that you have a cellar.

Furthermore, cellars often have dirt floors rather than the finished flooring of basements.

What’s the Purpose of a Cellar?

“Dry cellars” are often used for wine and tinned food storage; however, homeowners use them for a multitude of reasons. For instance, some will brew beer in these spaces, whilst others will take shelter in their cellars from harsh weather conditions. With this being said, cellars typically aren’t habitable and tend to be enclosed spaces without a “finish.

What are the Similarities?

As previously mentioned, the terms “basement” and “cellar” get used interchangeably, and this is mainly due to the key similarity between the two. This is that both terms describe a room that sits under- or partially underground level. With this being said, this is where the similarities end.

What are the Differences?

There are various factors that set basements and cellars apart from one another, these include size, height, access, purpose, windows, and habitation. Due to basements being more valuable than cellars, it’s important to know the difference, as this impacts the property’s value.

Typically speaking, basements are a lot bigger than cellars, as cellars are limited spaces with low ceilings. Similarly, basements tend to be a usable part of a dwelling (i.e., a habitable room), that is situated partly or entirely below ground

Normally, basements can be accessed via permanent stairs. In contrast, cellars aren’t always connected to the primary property. As a result, cellars may require a ladder or trapdoor to enter.

The key difference between basements and cellars is the purpose of each. For instance, basements can be finished off to act as living spaces, whilst cellars are designed to be storage spaces.

As a rule of thumb, windows will only be found in basements. If a cellar does contain a window, it will be very small.

Finally, as previously mentioned, basements can be transformed into living spaces. Here at Garratt's, we have a good track record of converting vaults & cellars into habitable spaces.

Taking Care of Your Basement or Cellar

There is a multitude of measures that you can take to care for your basement or cellar. These include an annual deep clean, the use of a dehumidifier, and the inspection of gutters, drainage systems, leaks, and cracks. Above all else, you should ensure that your basement or cellar is waterproofed by professional damp and timber contractors such as ourselves.

The basement tanking cost will vary from property to property, meaning a site survey is required to determine the extent of what’s needed. Contact us to learn more about how we can transform your home.