Can Woodworm be Harmful to Humans? 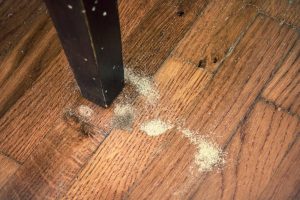 Naked to the human eye, the woodworm that infests timber structures in the home is actually beetle larvae that have hatched from eggs. Often, the first signs of woodworm are the small holes left behind once the larvae have fully grown and left the wood surface. By this point, the infestation may have long since left the structure, though it may have left it in a severely weakened state.

While we know all too well of the damage a woodworm infestation can have on timber, the other question that we are commonly asked here at Garratt’s Damp and Timber is can woodworm be harmful to humans? The answer is, to some extent, yes; some parasites linked to woodworm can leave nasty bites and rashes on humans if an infestation is left untreated.

What Parasites Will Bite Humans?

While the majority of bites and rashes occur during infestations of the Common Furniture Beetle, it is not actually the insect itself that is directly responsible. It is the parasite (known as Scleroderma Domesticum), that feasts on the larvae of the Common Furniture Beetle which is prone to biting. Such bites will tend to swell up over a number of days, becoming painful and sometimes requiring medical attention.

Additionally, the Pyemotes Ventricosus, also known as the European Straw Itch Mite, can also leave a similar rash. This is another parasite which feeds on the beetle larvae and can find itself on humans when we handle woodworm infested furniture.

These parasites usually find refuge in upholstery such as sofas and chairs, as well as cupboard and wardrobes. If you know that your property has a history of woodworm infestations, especially in the recent past, you will want to take the relevant steps to ensure that your furniture is not harbouring any unwanted visitors.

What to Watch Out for

It can be frustrating to think that the first clear sign of a woodworm infestation is the exit holes left behind by the adult wood-boring beetle that has already caused damage. Fortunately, there are a few other signs you can keep an eye out for to deal with your woodworm issues as soon as possible.

A build-up of sawdust (frass) underneath, around or on the surface of your timber can also indicate the presence of exit holes and wood-boring beetles. Also, occasionally you can hear the larvae scratching away inside the timber. This is usually during the evening or night and if you do notice such sounds or signs, we highly recommend calling on the help of a professional team immediately.

If you notice a timber surface in your home with a large number of exit holes, there is a good chance that the infestation has long since vanished, leaving behind a damaged structure that will require attention. The likelihood of the same timber being infested for a second time is low, as damaged timber is less suitable for the beetle to lay their eggs in. This is primarily due to a reduction in timber moisture levels; the nutrients having been consumed by the previous infestation.

Saying this, if the timber becomes moist once more it will attract additional wood-boring beetles and repeated woodworm damage, resulting in further structural damage. With this in mind, it is important to take precautions and protect your susceptible timber surfaces, or book a timber survey for a professional opinion.

What Are the Risks?

The risk of ignoring an infestation is clear - the longer that woodworm is left unattended, the higher the chance of your household’s timber structure becoming severely damaged. If acted upon early enough, invasive treatment will not be required, it will simply be limited to the localised area of infestation. However, if an infestation has been allowed to fester, invasive treatment will be required which can potentially make the home uninhabitable for a day or more depending on its severity. The use of chemicals will require you to stay away for your own health.

As well as invasive and potentially expensive treatment, the other risk, as detailed in this article, is the presence of parasites in your home that can bite and sting, leaving a nasty rash. If there are children or anyone that may have an allergic reaction to a bite living in the home, you should not delay in addressing the issue.

The most serious possibility is the risk of anaphylactic shock which, while the chances are exceedingly low and would require a high number of bites, should not be ignored.

How to Treat Woodworm

The best way of treating woodworm is to call on the service of a professional team such as Garratt’s Damp & Timber. Our team will inspect your property, diagnose any damp issues such as woodworm and offer clear and concise advice on the best course of action.

Due to the chemical substances that may be required to treat woodworm infestations, it is highly recommended leaving the job to a professional and not attempting it yourself. When performed incorrectly, the property can be left in a worse state than it was initially, with the presence of harsh chemicals, parasites and woodworm which is harmful to humans.

For more information on the woodworm treatments conducted by the Garratt’s Damp & Timber team, please get in contact with us today by calling us directly on 0208 535 7536 or messaging us through the contact page.