We can find fungus everywhere in the UK, from outdoors in the woods, scattered throughout meadows, even on our pizzas (mushrooms). However, there are certain types of fungus you don’t want to see growing in your home. These are indicators of a deeper problem, such as damp and rot and should be treated to ensure it does not spread or cause health issues. 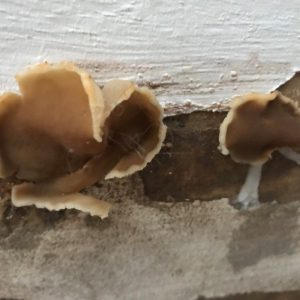 Older buildings are more susceptible to conditions encouraging fungus and mould growth, due to the materials used to build and often poor ventilation. Leading to the decay of structures and causing wet rot. London properties are particularly vulnerable, with many structures dating back hundreds of years.

One fungus you may find in your property is Peziza. It can be found growing on almost all popular construction substrates including carpet, mortar, plaster and brick. This type of fungus doesn’t attack substrate but is only present where materials are extremely damp, indicating a greater problem.

A Look at Peziza

There are many species of Peziza fungus belonging to the Pezizaceae family, although most common to the UK and Europe is Peziza Domiciliana. The Peziza Domiciliana fungus, more often referred to as the domicile cup fungus, appears most often on rotting wood but can anchor wherever conditions are damp enough. The fruit body (largest visible part) of the fungus is a recognisable cup shape and can grow as large as 10cm in diameter.

Peziza Domiciliana can have rapid growth, often appearing overnight in properties afflicted with damp. Although often incorrectly identified as dry or wet rot, the sole presence of Peziza in your home only indicates a source of water that should be identified and treated. Left untreated, the conditions that cause the fungus to appear can eventually lead to worse problems such as wood decay and wet or dry rot.

Peziza is a non-wood destroying fungi, remove the source of water and it will rapidly die, it is a useful indicator of damp conditions though. With fungus growth, it’s always wise to call in the professionals to advise and treat where required. Rather than just treating the problem area, a good surveyor will assist in finding the source of damp and eliminating it to prevent recurrence of mould and fungus growth.

If you are suffering from fungus growth in your property or have a suspected damp problem, reach out to our team on 0208 535 7536. Take care of your damp before it creates further problems such as dry or wet rot. We cover London and Northern Home Counties and offer free surveys for properties suffering from damp.