Focus on Fungus: Mine Fungus 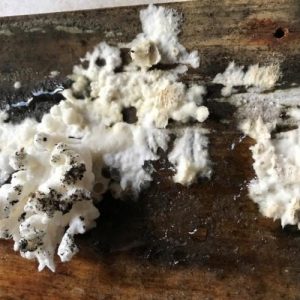 It may not be the most glamorous of topics, but fungus is a common and often pervasive issue for homes and businesses suffering from damp. While many of us focus on looking for damp patches, discolouration and flaked or blistered plaster, fungus and mould (related, but not the same thing!) are also easy-to-spot signs of a damp problem that needs addressing. Fungus can actually lead to bigger problems, causing both wet and dry rot, with cities like London being especially vulnerable thanks to older properties and the kind of climate that helps create the perfect fungal growth conditions.

Where there is smoke, there must be fire…

If you notice that a particularly large and unexpected population of fungus - whatever variety - has set up camp in your property, you should be asking yourself why. While it is impossible to entirely eradicate all indoor mould spores and fungal growth, noticeable patches are likely to mean that there is an underlying cause.

Common places for mould and fungus to call home include condensation-prone windows, kitchens and bathrooms, and rooms that are exceptionally humid, like basements. Pesky fungi can also thrive in undisturbed corners where leaks go undetected and damp occurs, such as under appliances, by broken plumbing or near leaking roofs.

What About Our Focus Fungus?

We’re glad you asked! Mine fungus is an especially interesting kind of fungus and one that can be challenging to contain.

The Mine Fungus’ full name is Fibroporia Vaillantii and it can usually be found on coniferous trees with a high moisture content. However, given the right conditions in a comfy, cosy, centrally-heated home full of humidity and high moisture timber, it can do very well indeed.

Perhaps one of the more intriguing species of fungi, Mine Fungus is easy to spot. Its body is between 2mm and 12mm thick, and it is an irregular white plate with a cotton-like appearance. In newly formed mycelium (the beefy part of a fungal colony), you will sometimes see fine drops of clear liquid.

This fungus is a form of wet rot, though many mistake it for dry rot so it is always best to ask an expert. The growth occurs in damp conditions where wood moisture is between 40% and 50%. It develops by feeding on the wood’s moisture and nutrients, decaying the wood and causing discolouration and shrinkage. Pinewood is particularly susceptible to the effect of Mine Fungus, which often leads to brown rot.

How Do I Treat Mine Fungus?

The best way with Mine Fungus, even a suspected case, is to call in the professionals. While it might seem like getting rid of the growth is the simplest way to solve the problem, you will almost always need to carry out remedial work and address the damp problem behind this moisture-mad menace.

As well as addressing the cause and the symptoms of Mine Fungus, you will need to look at any structural damage it might have caused. Depending on the extent and the pervasion of your particular colony, you may find that supporting joists and floorboards are compromised. Again, it is best to enlist the services of experienced and qualified surveyors and specialists.

So, if you have a fluffy white fungus problem, and you need to determine exactly what it is and what can be done about it, speak to our team today and request a survey.