What is the Difference between Wet and Dry Rot? 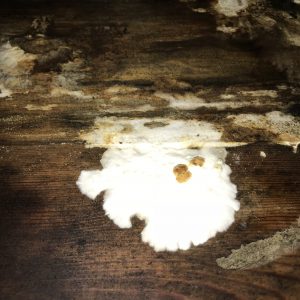 Rot is one of the most serious effects of damp that can damage buildings, causing serious issues to timber frameworks and should be treated as soon as possible to reduce the level of damage caused.

There are two main types of rot - wet rot and dry rot. Dry rot vs wet rot treatments require different approaches due to the differences between each type, and in order to understand each, we need to understand what we’re dealing with, what to look for, what the symptoms are, and the best course of treatment.

What is Wet Rot?

Wet rot is an umbrella term for a wide variety of different types of fungus that can set in and cause decay and, if left untreated, potentially end up causing serious structural damage.

There are over twenty different species of fungus in the family Coniophoraceae and when they grow, they are usually a black or brown colour – although they sometimes emerge as white such as when they grow underneath linoleum panels.

As the fungus grows, it consumes certain organic compounds within the timber and takes up the remaining space, lowering the overall structural strength of the wood. Sometimes, in cases where wet rot has been present for a long time, large, solid, flowering bodies of fungus can appear.

Get a Survey today

Where Should I Look for Wet Rot?

As the name suggests, wet rot needs a high level of moisture concentration in order to flourish. Wet rot will form in areas with around 50% moisture (requiring a far damper surface than dry rot) which is often much more noticeable.

This means that wet rot will commonly concentrate on wood that has been exposed to a persistent source of water, such as a damaged gutter, improperly fitted roofing tiles, leaking pipes, a wooden window frame with paintwork exposed, or an area that is repeatedly exposed to high amounts of water vapour that will later condense. Conversely, wet rot will find it more difficult to spread into persistently drier areas of the property.

What are the Symptoms of Wet Rot?

The most common and identifiable symptoms of wet rot are as follows:

How is Wet Rot Treatment Carried Out?

Like so many forms of treating infestations, treating wet rot is a step by step process. The first and most important step is to establish the source of the water that is fuelling the wet rot. Once that source can be isolated and repaired or removed, the wood must then be allowed to fully dry out before an inspection can be carried out to determine the next step. As a general rule, the next course of action would then be to remove and replace any damaged wood while removing any further signs of the fungus. However, the professional team of surveyors and building experts here at Garratt's Damp & Timber will advise you accordingly on a case by case basis.

What is Dry Rot?

Unlike wet rot, dry rot is a single type of fungus. Dry rot is the colloquial name for the fungus Serpula Lacrymans, which can settle into timber and woodwork and begin consuming and destroying it with as little as 20% moisture in the wood.

Because of this, dry rot can spread far further than wet rot. In both cases, capillary action allows the water to spread through the wood, but since wet rot requires an environment with a much higher moisture concentration in order to grow, it tends to only spread a limited distance. On the other hand, dry rot can easily spread further and consume more of the organic compounds in the wood as it progresses.

Dry rot is most often whiteish-yellow in colour, and will often form cotton-like sheets that reach through exterior brickwork. Sometimes, large, fungal flowering bodies can be present if the rot has reached an advanced stage.

Where Should I Look for Dry Rot?

Because of the hardy and durable nature of dry rot, it is important to thoroughly inspect the timber in your property for signs of dry rot. Don't forget to check areas that receive low levels of ventilation for dry rot, such as underfloor spaces that lack proper anti-damp proofing, as well as gaps immediately under roofs.

What are the Symptoms of Dry Rot?

The following symptoms of dry rot are important to bear in mind:

How is Dry Rot Treatment Carried Out?

In the same way as wet rot treatment, the first investigative step is to find the source of moisture that is causing the problem. This can be much harder with dry rot than wet rot, but our team of surveying experts are highly qualified, experienced, and well equipped with all the necessary tools needed to make progress in treating dry rot. Once the first stage is complete, the wood will be allowed to dry out so that the full extent of the problem can be observed.

The next step then involves looking to see how extra sources of ventilation or other anti-humidity measures can be installed to prevent recurrences in the future. Finally, the rot will be eradicated via the removal and replacement of any damaged or unsafe timber. All remaining timbers will be irrigated and sterilised.

What Makes Timber Vulnerable to Rot?

The central vulnerability is a lack of waterproofing. If timbers have not been properly covered in some form of protective agent, then they are much more vulnerable. Alternatively, such protection may have worn away with time, and it could be that water has broken through into the timber’s interior or another part of its sub-surface structure.

Garratt’s Damp & Timber specialise in the treatment and removal of wet rot and dry rot in London. For a quotation, please call our team on 0208 535 7536 today.