What is Woodworm and How do you Treat it?

Woodworm is a common issue in buildings that can eventually result in timber framework needing to be replaced as a result of infestation.

This is one of the most frequent causes of timber damage which can have a long-lasting effect on the framework of a building if woodworm is left untreated. Some forms of wood boring insects are more harmful to timber than others, but it is always best to consult a professional to identify the issue and recommend the best course of action for your home or business. 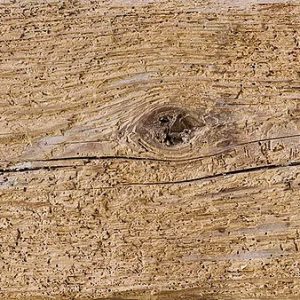 Woodworm is the term given to the larval stage of wood-boring insects, which sees eggs laid into small cracks on the surface of the timber. The most common type of insect is the Anobium Punctatum, otherwise known as the Common Furniture Beetle, while others include the Death Watch Beetle, House Longhorn Beetle and Powderpost Beetle.

As the eggs hatch, the larvae bore into the wood searching for cellulose and create tunnels and chambers from which an adult insect will eventually emerge from. Depending on the wood-boring insect, the flight-holes, from which the adults emerge, and the frass (the visible waste of the larvae chewing the exit), will differ, although all damage that occurs to the surface of wood for woodworm can be hard to spot, considering how small the exit holes are in diameter.

Depending on the type of wood and the species of wood-boring insect, the visible signs of a woodworm infestation can differ. However, all types of wood-boring insect larvae leave a mass of tiny holes in the wood when the adults mature and fly away, which is the most obvious indication. You might also notice flour-like or pellet-shaped wood “shavings” in and around the holes and underneath affected furniture or beams – this is the waste or “frass” produced by the larvae.

Here is a brief guide on what to keep an eye out for, regarding the most common types of wood-boring insects you might find in your property.

As the name suggests, the common furniture beetle is one of the most common wood-boring insects you will find in your home. It extensively bores into soft and hardwood with the grain, creating noticeably round tunnels that measure approximately 2mm in diameter.

Often seen alongside white rot, the death watch beetle prefers to lay its eggs in the rotting wood of elm and oak. Once the larvae hatch, they create widespread tunnels throughout the wood which they fill with “frass” that is noticeable on closer inspection. Interestingly, the death watch beetle is one of the only beetles that you can hear, typically on a quiet summer night, as they emit a tapping sound in order to attract a mate. Tunnels with boreholes of approximately 2-3mm in diameter are an indication of a death watch beetle infestation.

The ambrosia beetle is of the weevil subfamily and splits into different species depending on the location. The ambrosia beetle most common to the UK (Platypus Cylindrus) usually inhabits freshly cut logs or recently fallen trees but has been seen in residential properties. They prefer timber with ambrosia fungi in order to cultivate their fungal gardens for nutrients which turns the surrounding timber fibres a black or blue colour.

The bark borer favours bark-covered softwood and tends to create 2mm diameter tunnels close to the surface of the wood, leaving behind rounded waste that is coloured according to the wood they inhabit. Look out for small, rounded exit holes and the tell-tale sign of tunnels just below the surface of the wood.

The powder post beetle has a taste for young hardwood saplings that are below a decade in age and tunnels deep into the timber following the natural grain of the wood. Powder post beetles tunnel throughout the wood in a maze-like fashion, creating networks of small, rounded, conjoining and crossing tunnels that weaken the stability of the wood. Holes are very difficult to spot as they are only 1mm in diameter, although the waste produced has a flour-like appearance and consistency which can be easier to spot and identify. Such beetles are commonly introduced to properties in new furniture.

One of the largest wood-boring insects, the house longhorn prefers younger softwoods and is one of the worst offenders for finding in your home. Their large, 10mm wide tunnel boreholes are easier to see without assistance and while creating their tunnels, they leave behind long, cylindrical-shaped “frass” pellets. The House Longhorn is a very destructive beetle.

Another large wood-borer, the wharf borer insect most commonly stays in coastal buildings and structures, although it has been seen inland in buildings with serious damp problems. The wharf borer attacks the wood, leaving behind 8mm wide tunnels that are filled with a soil-consistency waste.

The Effects of a Woodworm Infestation

As the affected timber remains untreated, more and more chambers and holes will form as the lifecycle of the inhabiting beetle continues, resulting in an increased number of insects. Over time, this can weaken the timber to the point that a repair or replacement is needed, creating structural stress and destroying the surface appearance of timber beams and furniture. In the direst of circumstances, when an infestation is not recognised or treated, affected wood and timber can give way or collapse, leaving an expensive repair bill.

How Do You Get Woodworm?

Wood-boring insects are typically drawn to damp conditions and the presence of leaks or insufficient insulation in your home can lead to damp timber and timber decay that encourages wood-boring insects to lay their eggs. Most woodworm tends to go for older, untreated wood over younger furniture and timber frames, however, this depends on the particular insect and should a wood-borer get introduced to your home that has a preference for young timber, they will happily help themselves.

When purchasing and bringing old furniture into your home, check it over for indications of a woodworm infestation and ensure that it has been treated to drive out any remaining larvae and make it harder for future infestations to take hold. This is especially important for firewood, driftwood or kindling that advantageously, should be left outside rather than stored internally around other timber, whether this is furniture, open beams or wood intended for construction.

Make sure to regularly treat or apply a protective varnish to older or antique furniture pieces and ensure that any new wood coming into your home has been suitably treated with insecticide. If you own furniture that previously suffered from a woodworm infestation, it is susceptible to a returning attack and wood-boring beetles will happily lay their eggs in pre-existing boreholes so keep an eye out for wood-dust deposits.

Due to its preference for damp or moisture-holding wood, you are unlikely to suffer from woodworm infestations in a warm, dry home where your timber or wood has been sufficiently dried before the construction process.

How Does Woodworm Spread?

Woodworm has a four-part life cycle:

Egg-Laying – the female woodworm beetle begins the process of laying her eggs in damp timber with cracks or holes in the surface.

Growth – the embedded larvae eat the cellulose in the wood, sometimes staying for up to five years. This is when you might notice wood dust and also when the worst of the structural damage occurs

Maturation – the larvae, having gorged themselves on wood, form a pupa and metamorphose into the adult woodworm beetle which eats its way to the surface creating an exit hole. It then flies away to start the cycle again in fresh, damp timber

As the larvae stay buried for a considerable time (between 2-5 years) often the inhabited wood can dry out before the larvae mature into adults. This can prevent the spread of woodworm as females will only lay their eggs in timber that has a certain moisture level. However, if the infestation goes unnoticed and the damp problem persists in your property, woodworm beetles will lay their eggs in the nearest suitable wood. This might be the same piece they have emerged from or unconnected wood in the surrounding area.

Can Woodworm Spread to Other Furniture? 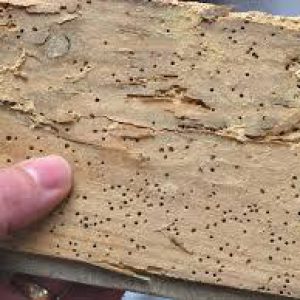 Wood-boring insects will only lay their eggs in untreated wood or timbers that have a certain level of moisture – this includes wood commonly found in lumber or construction yards, antique or old wood stored in damp conditions and in recently felled or rotting trees. As the larvae can reside in the wood, feasting for up to five years, it can emerge from purchased furniture while in your home, especially if the furniture hasn’t been closely inspected.

However, unless your home suffers from damp conditions, this includes in the walls and under counters and units, the female woodworm beetle will seek out ideal egg-laying conditions elsewhere. Another way to protect both old and new wood in your home is to regularly maintain furniture using a protective varnish as this will prevent wood-boring insects from laying their eggs. Wood-boring insects will not leave eggs on the surface of timbers, preferring to deposit them in cracks, holes or pre-existing woodworm boreholes.

In conclusion, the environment and circumstances play a huge part in the spread of woodworm in furniture. As long as your home is dry and well-maintained, any infestation should remain in the affected piece of furniture. Of course, if you have infested timber beams, the larvae can tunnel their way into connecting wood, so it is always best to seek treatment for woodworm as soon as possible.

How Do You Treat Woodworm?

Due to the numerous different species that can infest different types of timber, treatment methods do vary on a case by case scenario. A member of our team will be on hand to inspect your property and the affected areas and will be able to offer you a definitive conclusion on which type of insect is present as well as the best course of action for treatment.

One way of treating woodworm involves exposing the affected areas to a chemical spray that will exterminate the insects upon exit, thus breaking the cycle. If this is your treatment of choice, the premises must be vacant for a period of at least an hour. This is likely to be the most common treatment in most cases of woodworm caused by the Common Furniture Beetle.

Other species may warrant a gel treatment that is injected into the timber and spread across the surface of the material. You can find more information on how we treat woodworm infestations on our services page.

If you suspect that there may be a woodworm problem in your home, please call our team of professionals on 0208 535 7536 today for more information or to book a free property survey.